Nightingale was the major founder of the modern profession of nursing, and health care pioneer, who became famous for leading the first team of British women to nurse in war–the Crimean War of 1854-56.

While Nightingale was famous in her lifetime, and for a long time after it, she is little known today and often mis-represented. She wrote a lot! Not just her most famous book, Notes on Nursing; published in 1860, the same year that her training school opened.

Here are some key points on her work and legacy: 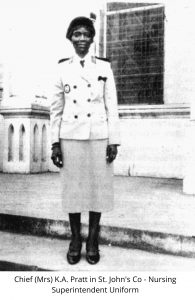 Family: Born in Lagos, where she lived many years, Kofoworola Abeni Scott (1915-1992) married Olu Pratt, a pharmacist, who later qualified in medicine in Edinburgh. The wedding took place on 3 June 1941, at the Cathedral Church of Christ, Lagos. Of the couple’s three sons, the first, born in eastern Nigeria, died in infancy. The second, Babatunde, was born in Lagos in 1943 (he qualified in medicine at St. Bart’s in 1978), the third, Olufemi, born at Guy’s Hospital, London, was baptized at St Martin-in-the-Fields Church (he qualified in aeronautical engineering, in 1974). Mrs Pratt and her husband went back and forth between England and Nigeria, and he also to a post in Cameroon.

Click the link to download a digital copy of the biography An African ‘Florence Nightingale’: The Life of Chief (Mrs) Dr Kofoworola Abeni Pratt [Justus A. Akinsaya, Ibadan: Vantage, 1987].